The breast is the upper ventral region of an animalâ€™s torso, particularly that of mammals, including human beings. The breasts of a female primateâ€™s body contain the mammary glands, which secrete milk used to feed infants. Both men and women develop breasts from the same embryological tissues. However, at puberty, female sex hormones, mainly estrogen, promote breast development which does not occur in men. As a result, women's breasts become far more prominent than those of men. 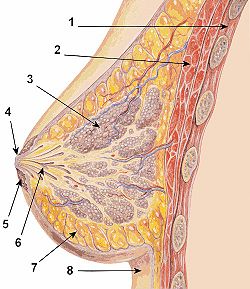 Anatomically, breasts are modified sudoriferous (sweat) glands which produce milk in women, and in some rare cases, in men.[1] Each breast has one nipple surrounded by the areola. The color of the areola varies from pink to dark brown and has several sebaceous glands. In women, the larger mammary glands within the breast produce the milk. They are distributed throughout the breast, with two-thirds of the tissue found within 30 mm of the base of the nipple.[2] These are drained to the nipple by between 4 and 18 lactiferous ducts, where each duct has its own opening. The network formed by these ducts is complex, like the tangled roots of a tree. It is not always arranged radially, and branches close to the nipple. The ducts near the nipple do not act as milk reservoirs; Ramsay et al. have shown that conventionally described lactiferous sinuses do not, in fact, exist. Instead, most milk is actually in the back of the breast, and when suckling occurs, the smooth muscles of the gland push more milk forward.

The breasts sit over the pectoralis major muscle and usually extend from the level of the 2nd rib to the level of the 6th rib anteriorly. A thin layer of mammary tissue extends from the clavicle above to the seventh or eighth ribs below and from the midline to the edge of the latissimus dorsi posteriorly.

Breasts vary in size, density, shape, sag and position on a woman's chest, and their external appearance is not predictive of their internal anatomy or lactation potential. The natural shape of a woman's breasts is primarily dependent on the support provided by the Cooper's ligaments and the underlying chest on which they rest (the base). Cooper's ligaments, also known as the suspensory ligaments of Cooper, suspend the breasts from the clavicle and the clavi-pectoral fascia. As their fibers run around and through the breast, these ligaments support the breasts in its position on the chest wall and maintain their normal shape. The breast is also attached at its base to the chest wall by the deep fascia over the pectoral muscles. In a small number of women, the frontal ducts (ampullae) in the breasts are not flush with the surrounding breast tissue, which causes the sinus area to visibly bulge outward.

Some breasts are high and rounded, and protrude almost horizontally from the chest wall. Such high breasts are common for girls and women in early stages of development. The protruding or high breasts are anchored to the chest at the base, and the weight is distributed evenly over the area of the base of the approximately dome- or cone-shaped breasts.

Girls develop breasts during puberty, as a result of changing sex hormones, chiefly estrogen, which also has been demonstrated to cause the development of woman-like, enlarged breasts in men, a condition called gynecomastia.

In most cases, the breasts fold down over the chest wall during Tanner stage development.[3] It is typical for a woman's breasts to be unequal in size particularly while the breasts are developing. Statistically it is slightly more common for the left breast to be the larger.[4] In rare cases, the breasts may be significantly different in size, or one breast may fail to develop entirely.

A large number of medical conditions are known to cause abnormal development of the breasts during puberty. Virginal breast hypertrophy is a condition which involves excessive growth of the breasts, and in some cases the continued growth beyond the usual pubescent age. Breast hypoplasia is a condition where one or both breasts fail to develop.

As breasts are mostly composed of adipose tissue, their size can change over time. This occurs for a number of reasons, most obviously when a girl grows during puberty and when a woman becomes pregnant. The breast size may also change if she gains (or loses) weight for any other reason. Any rapid increase in size of the breasts can result in the appearance of stretchmarks.

It is typical for a number of other changes to occur during pregnancy: in addition to becoming larger, the breasts generally become firmer, mainly due to hypertrophy of the mammary gland in response to the hormone prolactin. The size of the nipples may increase noticeably and their pigmentation may become darker. These changes may continue during breastfeeding. The breasts generally revert to approximately their previous size after pregnancy, although there may be some increased sagging and stretchmarks.

The size of a woman's breasts may fluctuate during the menstrual cycle, particularly with premenstrual water retention. An increase in breast size is a common side effect of use of the combined oral contraceptive pill.

Breasts sag if the ligaments become elongated, a natural process that can occur over time and is also influenced by the breast bouncing while exercising (see Sports bra). Breasts can decrease in size at menopause if estrogen levels decline.

Plastic surgical procedures of the breast include those for both cosmetic and reconstructive surgery indications. Some women choose these procedures as a result of the high value placed on symmetry of the human form, and because they identify their femininity and sense of self with their breasts.

Factors that appear to be implicated in decreasing the risk of, or early diagnosis of breast cancer are regular breast examinations by health care professionals, regular mammograms, self examination of breasts, healthy diet, and exercise to decrease excess body fat. Healthy diet appears to reduce the risk of breast cancer, and includes limiting dietary fat, eating a balanced diet that includes plenty of nutrients, and dietary fibre such as are found in fruits and vegetables, and restricting intake of alcohol to a maximum of two drinks per day or less.[5]