Clitoroplasty is a term for the surgical creation (in trans women as part of gender reassignment surgery) of a clitoris, or restoration, in the case of a procedure to reverse the damage caused by female genital multilation.

People with congenital adrenal hyperplasia may also undergo this to correct genital anatomy or complications of the condition.[1]

It is rarely performed on ciswomen for cosmetic reasons. 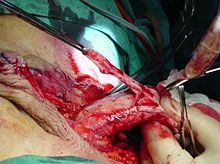 Dissection of the glans to-be clitoris from the corpora.

As part of reassignment surgery for trans women, there are several ways to create a clitoris out of existing tissues. The most common method in practice, is to separate the glans of the penis from the paired erectile tissues, and reduce in size to simulate a biological woman's clitoris.

The success rate for the creation of a clitoris for trans women varies greatly. The most common cause of failure is the necrosis of the tissue from lack of blood supply. The greatest non health risk is damage to the pudendal nerves, if they are severed, the chance at clitoral orgasm is greatly reduced.

Most transsexual women's bodies readily accept the relocation of glans penile tissue in the area of a biological woman's clitoris. The glans tissue derived clitoris (using simple dissection techniques), is not a perfect emulation of the clitoris of a biological woman because of the difference in color, shape, and sexual response.

Dr. Suporn Watanyusakul uses a modified technique that preserves most of the glans penis tissue (and prepuce) in the clitoris and vaginal vestibule (the latter termed by him as the "Chonburi organ"). His technique is thought to better simulate sexual response and aesthetics in uncircumcised patients.

An alternate technique, involved the use of urethral spongiform as a makeshift clitoral mound. This allowed for better simulation of female sexual response at the cost of the clitoris being not as sensate as one derived from the glans penis. Urine leakage was a notable complication with this technique.[2]

Older genital reassignment techniques made no attempt at the creation of a clitoris at all. The glans of the penis was sutured in the most distal (inner) part of the neovagina to simulate a cervix. The late Stanley Biber preferred this method.