Metoidioplasty, sometimes referred to as a meto or meta or spelled "metaoidioplasty", is an alternative to phalloplasty for trans men [1]. With the effects of testosterone treatment, the clitoris enlarges, over time, to an average of 4-5 cm.[2] (due to the clitoris and penis being developmentally homologous organs)

In a metoidioplasty the enlarged clitoral tissue is released from its position and moved forward to more closely approximate the position of a penis. Oklahoma physician Dr. William David Foerester was one of the first U.S. surgeons to perform this technique on trans men.

Metoidioplasty is technically simpler than a phalloplasty, and has fewer complications. The surgery itself is also considerably shorter (2-3 hours vs. 8-10 hours overall) and it is much less expensive. Unlike a phalloplasty, an erectile prosthesis is not needed to achieve erection, although the erection is usually less hard compared to the penis of a cisgender man. Because metoidioplasty can not achieve penile dimensions comparable to a cisgender penis, the neopenis is usually not capable of penetrative sexual intercourse. Genital orgasm is almost always retained after surgery. (unlike phalloplasty which carries significant risk of loss of erogenous sensation) 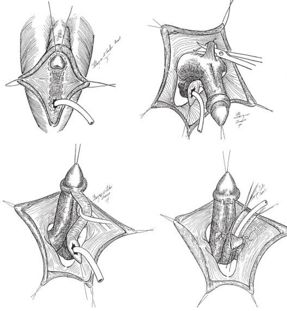 In a study of post-operative men, 28% of patients who had the urethra extended had temporary swelling resulting in dribbling and spraying of urine, no medical intervention was needed. There was only a couple percent of chance of urethral strictures, (narrowing of the urethra) and less than 10% had instance of a fistula, (hole in the urethra) requiring minor revision. The average neophallic length after was 5.7 cm. (with a range 4â€“10 cm) All patients reported ability to achieve an erection and normal sensation. In patients who had scrotoplasty, there was no reports of rejection or complications related to the testicular prostheses.

If a metoidioplasty is performed without extending the urethra and/or a scrotoplasty, this is sometimes called a clitoral release. This is less expensive than a complete metoidioplasty but does not allow for urination (through the new penis) while standing. However this also offers surgery with less risk because the urinary system remains unaltered without a urethral extension and still affords some of the visual effects of a complete metoidioplasty along with the ability to have intercourse in a more traditional way. While vaginectomy is an option with this surgery, it may be only partially completed due to risk of urinary complications.