The vagina (from the Latin for "sheath" or "scabbard" ) is the tubular tract leading from the uterus to the exterior of the body in female mammals, or to the cloaca in female birds and some reptiles. Female insects and other invertebrates also have a vagina, which is the terminal part of the oviduct.

For the purposes of anatomy, a vagina can also be any structure that serves as a sheath (or theca), as in, the vagina of the portal vein. Another example is the fibrous sheath around tendons, called a vagina fibrosa when solid or a vagina mucosa when it contains a fluid-filled cavity around the tendon. 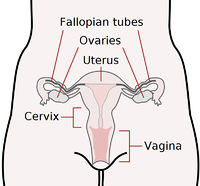 The female reproductive system
The vagina is an elastic muscular tube about 4 inches (100 mm) long and 1 inch (25 mm) in diameter that connects the vulva at the outside to the cervix of the uterus at the inside. If the woman stands upright, the vaginal tube points in an upward-backward direction and forms an angle of slightly more than 90 degrees with the uterus. The vaginal opening is at the back end of the vulva, behind the opening of the urethra. The inside of the vagina is usually pink, as with all internal mucous membranes in mammals.

(In common speech, the term "vagina" is often used improperly to refer to the vulva or female genitals generally; strictly speaking the vagina is a specific internal structure and the vulva is the exterior genitalia only. Calling the vulva the vagina is akin to calling the mouth the throat.)

The vagina can perform the following tasks:

Length, width and shape of the vagina vary greatly. When a woman gives birth and during sexual intercourse, the vagina widens and lengthens up to 2-3 times. Vaginal lubrication is provided by glands near the vaginal opening and the cervix and also seeps through the vaginal wall (which does not contain any glands).

The hymen—a membrane situated behind the urethral opening—partially covers the vagina in many organisms, including some human females, from birth until it is ruptured by first coitus, or by any number of other activities including medical examinations, injury, certain types of exercise, introduction of a foreign object, etc.

Some women have a very sensitive erogenous zone called G-spot inside their vagina.

The vagina is examined during gynecological exams, often using an instrument called a speculum, which keeps the vagina open for visual inspection or taking of samples (e.g pap smear).